Arnold R. Rojas (1896 - 1988) or "Chief Rojas" as he was known, has the distinction of being the most celebrated chronicler of the life and lore of California's Vaqueros. He did this in a series that he didn't start publishing until he was into his mid-50s, his first, "The California Vaqueros" in 1953. Ultimately he would publish seven books over the years, the final one being, "Vaqueros and Buckaroos" in 1979. He wrote about what he knew and loved – the life and ways of the old California vaqueros – men he rode and worked with for over fifty years. Lucky for us, he wrote down the memories of all those years for as he said, "These are stories as seen through the eyes of old vaqueros, they are something of the splendor of those days, for there will never be another cattle ranching era in California that produced such men."

His was a style of grace, never of anger. Of that fact, he wrote, "If I wrote in a lighter vein, it is because most vaqueros and buckaroos never took life too seriously. If what was written was pleasantry, it is because my experiences were pleasant. If I do not write of hatred, it is because I saw none."

He was a voracious reader and yet never progressed beyond the third grade in formal education, rather he worked at what he knew – as a vaquero throughout the central part of California in and around the vast San Joaquin Valley. In his writing, he constantly asserted the importance of the quiet pride the vaquero took in his work. He would, I believe, be pleased today to see once again the vaquero of his beloved west is being remembered and respected for his fine ability with horses and cattle.

He was a true throwback, a man who showed respect for the old ways and for the viejos – the old ones. Additionally, he was an important figure in ethnic writing of the era and held an uncompromising pride in his heritage – his family coming to California in the 1820s from Sonora, Mexico. His books were part of the foundation of ethnic pride that was built upon in the tumultuous era of the 1960s. Arnold Rojas has found his place in history as an important literary contributor to the legacy of a region in the west where the horse and horsemen were king and the value of a man was placed in his character and competency, not what he carried in his pocket. Simply put, in Rojas the vaquero found their champion.

NOT FOR INTERNATIONAL SHIPPING 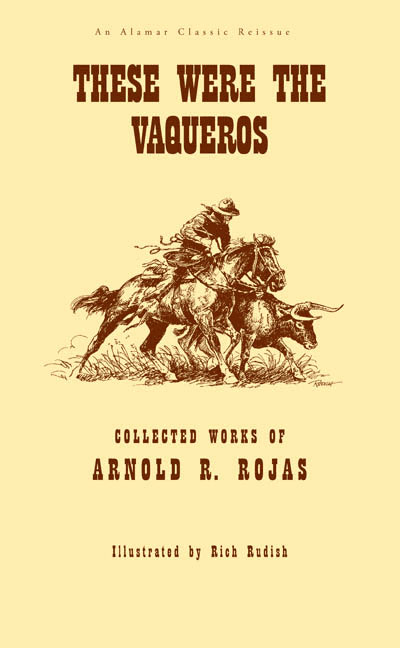